All permissions in WebAdMIT cascade from the concept of a user identity.

What is a user identity in WebAdMIT?

Each of the selectable items in the standard WebAdMIT account dropdown are considered to be standard admissions-level user identities. For most universities, this ties to the cohorts of students from each major graduate department: 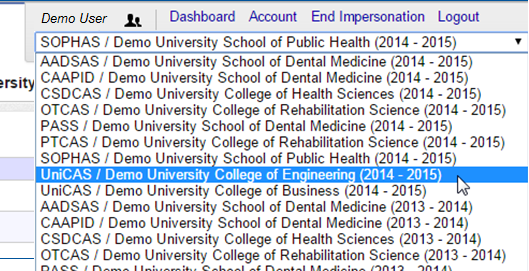 There are two additional “special” types of identities available in WebAdMIT:

In general, configuration entities such as Lists, Exports, Email Templates, and so on in WebAdMIT are “owned” by one of a user’s identities. Every identity that is part of a user’s profile has a name and a unique identifier. These can be retrieved via one of the API calls discussed in this documentation. Admissions, Association, and Institutional identities can all be addressed by name or ID in the same manner.

Retrieve details on all user identities that are part of a user's WebAdMIT profile and that have the "API Access" permission assigned to them. The id associated with each identity will not change, and only becomes something new when a new identity is created – for example at the start of a new academic cycle.